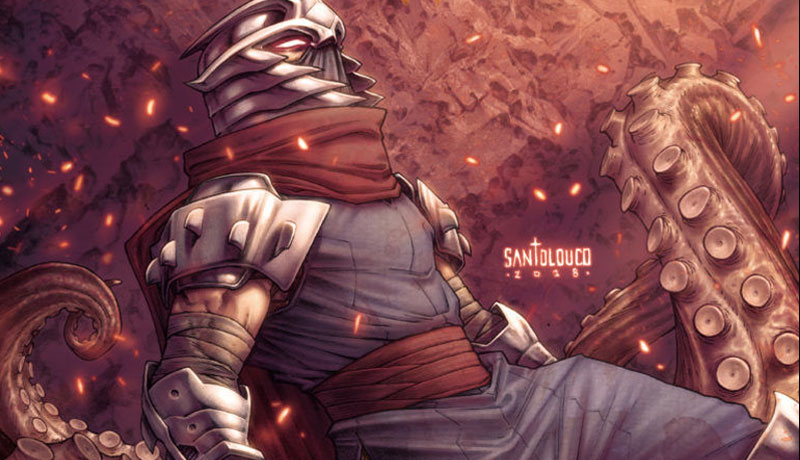 From SYFY WIRE by Jeff Spry.

The Teenage Mutant Ninja Turtle realm is about to get a lot hotter as IDW’s latest mini-series ignites the comic stands with TMNT: Shredder In Hell #1.

Announced as a sequel to 2012’s The Secret History of the Foot Clan plotline, this five-issue event written and drawn by Mateus Santolouco drops on Jan. 16 and chronicles Shredder’s decent into the humid halls of Hades.

As a lament to the late Oroku Saki, SYFY WIRE has scored an exclusive chat with the series creator and an early peek into its hellish pages that cut to the core of the entire TMNT universe.

Santolouco will sink readers into the damned pits of the afterlife, where Shredder, the infamous Chief of the Foot Clan, struggles to survive, then discovers his true purpose in life along with the sacred origins of the noble beings responsible for the birth and death of his world. Its subtle shades and desaturated hues will come via the talented colorist Marcelo Costa, and the book also features a wild rush of variant covers from Gabrielle Dell’otto, Sajad Shah, Rafael Albuquerque, Peter Laird, Creees Lee, Marat Mychaels, and TMNT royalty, Kevin Eastman.

Read the full interview with Mateus Santolouco and enjoy an exclusive preview in the SYFY WIRE.